Our Shire horses are an integral part of our work at Chawton House Library. The dedicated team looking after the horses are led by head horseman Angie McLaren with her assistant horseman Lucy Davis.

Angie wrote an article for our publication, Letter from Chawton House, in December 2007. Please follow the link to view the PDF .

Royston will be 3yrs old on the 16th April 2011. He is an extremely friendly and active horse, causing quite a stir among the other horse's when he arrived. Summer is very fond of Royston and spends many hours in the field grazing with him.

Summer is just over a year old. She came to us in June of 2010 from the St Francis animal shelter. Summer's mother had died shortly after giving birth to her and subsequently had to be hand reared. Summer rapidly grew and became to much large for the restricted grazing available to the shelter. She has now settled in to her new home and companions. Summer has been a fantastic hit with the visitors of all ages to the house.

Saracen joined us in December 2005 and replaced Sam who we sadly lost the previous summer.  He stands at 17.2 hands and was born in 1990.  Saracen is on loan to us from a family in Kent, who enjoyed taking him out and about to local shows.

We allowed him time over the first winter to settle into his new home and to get to know the other ‘lads’.  We are now spending time bringing him back to work.

He has a very friendly nature and has only shown himself to be a gentleman since he arrived. He has recently had an eye removed, but has since made a full recovery and is enjoying being out with the other horses.

His confidence and trust has grown tremendously since his arrival here and he now undertakes some of the jobs around the estate, occasionally replacing the tractor.

Clarence was born in 1993 and stands at 17.1 hands. He is on loan to us from Mr Ewan MacPherson. Clarence has now been retired from working on the estate, and is enjoying his days in the parkland and fields on the estate.

Clarence is very affectionate and extremely nosey, although he is the youngest and smallest of the horses, he makes up for it in personality. He has recently (2011) had new shoes fitted by the Farrier to alleviate some discomfort in his Coffin joints.

Charlotte is showing herself to be quite a character and is very popular with the 'Boys'. 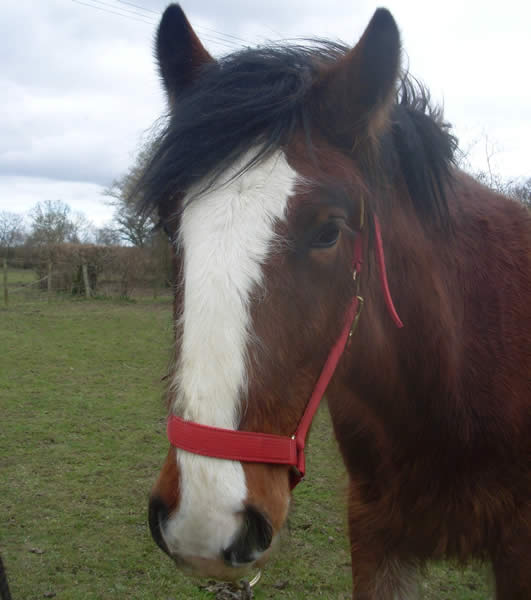